If you want to build your home, want to repipe the existing pipes or you just want to replace a section of the pipe that is damaged, you have a variety of option to choose from. Copper is no longer the preferred or primary choice of plumbers and homeowners. Let’s go through PEX vs. Copper Piping and see which one to choose.

Advantages of PEX vs. Copper Piping 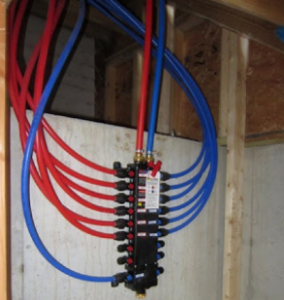 It is pocket friendly, it usually costs at least twenty five percent less than copper and it’s the best alternative in areas which are too tight or small for rigid CPVC and copper pipes. Tubing of PEX is connected by snapping it into connecter fittings or by using crimp rings with compression tool. It installs faster, which substantially eliminates labor costs compared to installation of copper pipe.

Research done by scientists in the United States show that PEX pipe does not corrode. Also, PEX pipes do not allow building up of sediments inside the pipe. As a matter of fact, this pipe can expand about eight times its size before it freezes.

The popularity of PEX can be attributed to several factors, including resistance to chlorine and scale, flexibility, cost, and quicker installation with fewer fittings and connections. It is more efficient as it does not loose heat like copper. Even though PEX pipe is not ideal to be used outside, it’s much more resistant to bursting and freezing temperature.

One of the biggest disadvantage of copper is that it reacts to several metals that come in touch with it like galvanized clamps and nails. It also causes electrolysis that literally puts pinholes in the copper pipe. This pipes are prone to wearing down because of the flow of water throughout the pipe. When the flow turns the fitting, it wear out the edge or fitting of the pipe, making it to leak.

Copper pipes for long has been the standard for plumbing and need a specific skillset for fitting and soldering/sweating pipes together. This is a job which anyone can do, but it needs patience and is best performed on a workbench and vise before practicing under the sink.

Copper has ideal attributes that make it best for plumbing. Pipe made of copper creates biostatic atmosphere that make it hard for bacteria to grow inside. It is also unaffected by UV rays and resist corrosion, which allows it to be used outdoors.

Having looked at PEX vs. Copper Piping it is up to you to decide which one to use in your home. Consult a professional plumber on the best piping system to use.