Polybutylene Pipe (“PB”) is a non-rigid sometimes curved, usually gray (or possibly silver or black) plastic pipe used in indoor plumbing. The fittings / joints connected to the PB pipe, such as elbow and tee-shaped joints can either be gray acetal plastic inserts or copper / metal inserts. The poly pipe connectors are typically barbed with a crimp ring or compression with a plastic or metal ferrule. 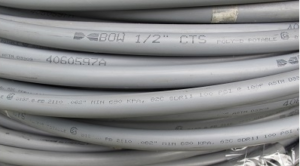 Pipes made up of Polybutylene is extremely prone to failure and unexpected bursting. If this type of pipe is observed as the incoming water supply line, it is recommended that it be replaced as soon as possibly. There is another type of piping, PEX piping – that is more reliable than poly piping but is also known to be colored blue. It should not be confused with poly piping.

The only way to eliminate the possibility of problems associated from deteriorating polybutylene piping is to replace the pipe itself. Fortunately, this procedure is relatively inexpensive and can be accomplished by a licensed plumber or re-pipe specialist.

Poly piping runs behind the walls and under the floors of a home or building. It will be necessary to cut holes in the walls and floors to repipe, a professional can perform it with minimum of damage to walls, and other structures. Typically, it is not necessary to “chip up” slabs to replace the piping, as it can normally be accomplished through the attic, crawlspace, or trenching around the buildings exterior walls. The polybutylene class action law suit applied to homes with polybutylene installed between 1978 and 1995.

There are still millions of homes with this installed piping across America. From a proactive position, it would be wise to have the home or building repiped prior to suffering water damage from burst piping. The average replacement cost for repipng an average one story home would generally be in the $3,000 range.